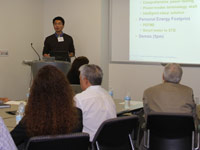 The average American over the age of 2 spends more than 34 hours a week watching live television, says a 2012 Nielsen report — plus another three to six hours watching taped programs. In the meantime, other ways to watch TV programs are gaining popularity, such as video streaming on a computer or a mobile device. What kind of new set-top boxes and new features are being deployed to meet the demand? How is this trend of pervasive “TV watching” going to impact the energy consumed in delivering the content?

By the end of 2012, Cable, telco and satellite providers have entered into a Voluntary Agreement that represents significant energy saving plans. To what extent has this agreement facilitated new standards and policies? What is the outlook of energy savings in the deployment of future fleets? Will the participants advance with new ENERGY STAR standards?

Upstream, midstream and downstream, where can the incentive dollar be used most effectively to promote more efficient STB systems? The industry targets the end of 2014 to ensure 90% of new STB stock qualifying for Energy Star 3.0. CalPlug will assist the design of an incentive program based on studies of consumer behavior and adoption pattern in collaboration with utilities and service providers. How should public and investor?owned utilities and government agencies coordinate their many incentive programs?

Imagine a world where all STBs go to sleep at less than five watts and wake up in five seconds. CalPlug is designing, prototyping and testing on this “5W5s” vision, with industry project champions. In spite of ever? advancing software, firmware, hardware and chipsets for STBs, the usage pattern and behavior of the users remain a dominant variable. Deemed savings aren’t so easy to be determined. How can cutting?edge power management cope with wide differences in both the STBs and the users themselves?