DOE Makes it Official at Calit2 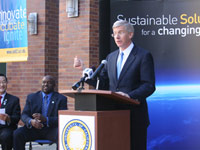 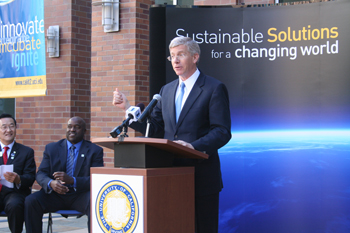 Poneman announces UCI’s inclusion in the 2015 Solar Decathlon to be held at Orange County’s Great Park. (All photos courtesy of Samueli School.)

On a clear and appropriately sunny Southern California day, the Calit2 courtyard yesterday provided a picturesque setting for a formal announcement that many at UC Irvine had been anticipating eagerly.

In addition, Poneman revealed that Orange County’s Great Park will host the October competition for the second consecutive time. The biannual challenge took place at the Great Park last year, the first time it had moved from its original venue on the Mall in Washington, D.C.

“This is a great day,” Poneman said after stepping to the microphone with a resounding and well-received “Go Anteaters!

“This is where it’s really fun for someone like me. Because this is where the real work is happening.”
Poneman told the crowd, which included students, UCI administrators, representatives from Chapman, Irvine Valley College and Saddleback College, local politicians and other dignitaries, that it’s imperative to attack the planet’s climate challenges head-on with “young people” leading the charge. “We’ve got to get ahead of the curve. That’s where you come in. We need you. It’s all about innovation.”

He credited former Secretary of Energy Stephen Chu with creating the Solar Decathlon, saying Chu had challenged America to make solar energy commercially viable and competitive within a decade. The strategy appears to be working; the competition, which has spawned Solar Decathlons abroad, has already resulted in several commercially available home-energy-management technologies. 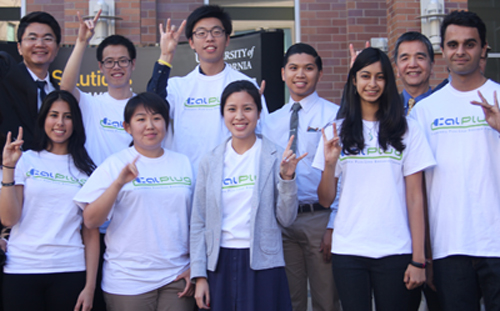 Team Orange will compete in the 2015 decathlon with other California teams including Stanford, Cal Poly San Luis Obispo, Cal State Sacramento and UC Davis, as well as teams from Yale, Clemson, State University of New York, University of Buffalo, Vanderbilt, West Virginia University, Missouri University of Science and Technology, University of Texas at Austin and eight others.

Washington then invited all the Team Orange participants to the podium for a victory cheer. “One loud and thunderous cheer, on three,” he said to deafening applause. “One, two, three: GO TEAM ORANGE!” 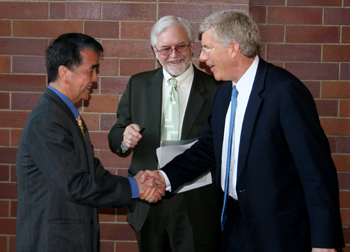 Li (left) meets Poneman before the presentation as Brase looks on.

At CalPlug, which was established in 2011 to improve energy efficiency in appliances and consumer electronics, Calit2 Irvine Director G.P. Li gave Poneman a brief introduction of the center. “CalPlug collaborates closely with government agencies, manufacturers, utilities, and consumer advocate groups to assist in developing future appliance efficiency standards and incentives for manufacturers and retailers,” he said, to which Poneman replied: “Excellent.”

The deputy energy secretary viewed the CalPlug Wall of Power, an effort to deliver specific energy usage information to consumers through a secure delivery channel. “Will this turn off appliances when you reach a certain threshold?” he asked CalPlug manager Arthur Zhang, who replied in the negative. “My mother is nervous about that,” he said to laughter. 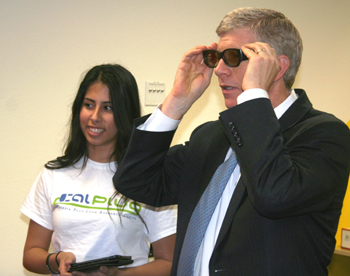 He then sat in on a presentation about UCI’s successful effort to reduce energy usage in campus laboratories. Brase said that labs typically are responsible for 2/3 of a campus’s total energy usage, but by using sensors and software to control ventilation, and measure occupancy and air quality on a space-by-space basis, UCI has dramatically reduced the amount of energy consumed in labs by 50-60 percent.

“Send me that slide presentation electronically,” Poneman requested. “We are always trying to bring best practices to our national labs and I would like our lab directors to know about [these efforts].”

He concluded his visit with a tour of the National Fuel Cell Research Center, where Prof. Scott Samuelsen shared a beta testing center for assessing fuel cells in different applications, as well as a fuel cell materials fabrication and testing lab. The deputy secretary then left the sun and blue sky of Orange County behind as he prepared to return to the snow, sleet and blizzard-like conditions of Washington, D.C.