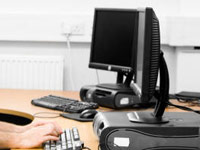 Respondents shared information about the computers they use at home and at work, including whether they have changed manufacturers’ settings for power management, and whether they turn their machines off when they aren’t in use, put them to sleep, or leave them on.

Now, the researchers are launching a follow-up study to help them better understand the power states of desktop computers used on campus.

Participants have been selected from among the original survey’s staff, faculty, and graduate student respondents. Researchers will install a commercial software program on each participant’s primary campus desktop which will collect data for up to six weeks. The program will record the computer’s power states over time, including how long the computer is off, actively being used, or in sleep mode. (It will not record websites visited, programs used or any personal data.) The software, called Verdiem Surveyor, does not affect or interfere with any of the computer’s other programs or processes.

Installation requires less than 30 minutes and will be scheduled at a time convenient for the participant. In keeping with the campus requirements for such studies, all data will be kept confidential; no identifying information will be reported. Verdiem software has been successfully used in many companies and universities.

The research is funded by the California Energy Commission and conducted by the California Plug Load Research Center at Calit2. The findings will give manufacturers, regulators and environmentalists a better idea of how people actually use their computers, and help them design and manage more useful devices, programs, and policies. The results will also help UCI understand its own energy usage.

“Combined with the earlier survey, this research will provide us with new data on real-life patterns of computer use and power management,” says lead researcher Joy Pixley. “There is little prior research of these issues at major universities, and few studies have examined both work computer and home computer use, so we hope the UCI study will be a valuable contribution to the field.”