After near one year of effort in 2013 from the Engineering Lab of the CalPlug center, primary objectives of this set-top box power consumption study are finished. We have constructed a state-of-the-art laboratory that is specialized in conducting industry standard power testing procedures. Major testing standards, such as Energy Star, IEC and CEA2043 are compared and harmonized throughout our testing activities. We have worked in close collaboration with major service providers including DirecTV, Dish Network, and Comcast. We were able to acquire from each category at least one set-top box system with commercial subscription, contributed from cable and satellite industry. STB models ranging from the year 2000 to 2013 pre-release were installed, tested and analyzed for power consumption and power factor under various configurations. Emerging configurations that affect energy consumption such as multi-tuner server and multi-room with thin-clients are studied closely. 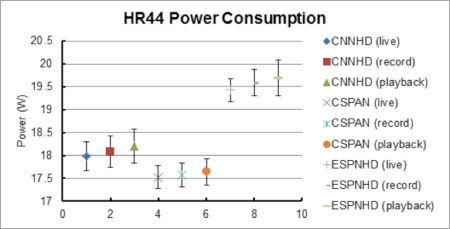 One example measurement is shown above. The average power consumption when the STB & TV is in watching live, recording, playing back with both HD reference channel and standard channel was measured. From the results, the HD channel consumes significantly more power than the standard definition channels. This is due to the channel being played in high definition, which is using more power for a higher resolution. Furthermore this channel has a higher frame rate due to the motion of athletes. However, the recording and playback features don’t seem to have much effect on the average power consumption for any channel. 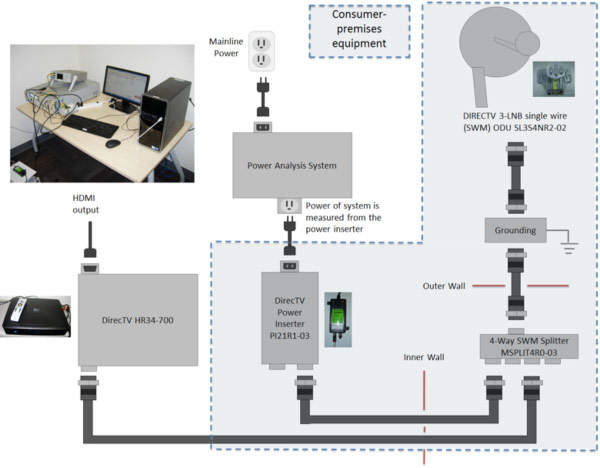 Ecova and DirecTV were really interested to understand the energy consumption of the consumer premises equipment, such as satellite receivers and amplifiers. Low-noise block down-converters (LNBs) and multi-switches are devices under test (DUT). DirecTV provided residential satellite system at CalPlug and Energy Star compliant testing procedures were followed at CalPlug. In the final report, the power consumption of a typical residential type satellite system is analyzed. The entire residential system is powered by the PI21R1-03 model power inserter DirecTV employs. The inserter is capable of connecting up to 8 tuners to the system using DirecTV’s Single Wire Multi-switch (SWiM) technology. The number of tuners that can be supported is primarily a function of the system design, the power supply is designed to support the SWiM device, and the power supply does not necessarily directly determine the number of tuners that can be supported. 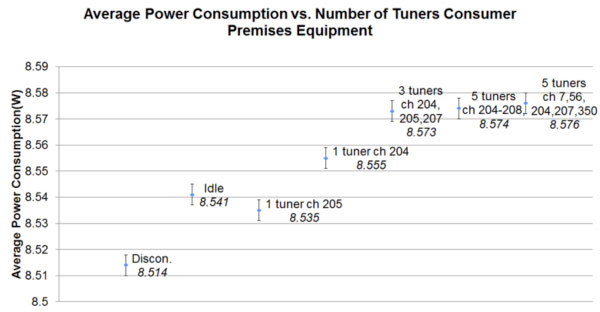 As final test results, the Consumer-premise equipment including LNBs and multiswitch tested on average consume about 8.5 W. This power fluctuates within ± 0.1 W as multiple STBs are connected and playing various channels. The maximum effect an extra Set-Top-Box has on this system is ±1.2%. Power consumption increases marginally with an increased number of tuners. Power consumption is marginally affected by the channel(s) tuned to. Therefore, multi-room STB system setup can share the fixed cost of energy on consumer-premise equipment to transmit TV signals.

This project is to test the energy saving potentials for the Advanced Power Strip + device produced by Tricklestar, through both bench-top and CalPlug SIM lab test. Deemed savings with a typical American household plug load environment and usage pattern will be estimated.

The product has been tested according to UL 1363 Testing Standards for Re-locatable Power Taps for the purpose of calibrating the equipment and test procedures used in the SIM lab. A number of APS+ devices was deployed in CalPlug SIM labs with an average American household living room setup. To best simulate a field trial, it is important that the appliances be tested under the same conditions as would be utilized by a consumer. Test runs as long as a full week will be conducted with standard American consumer usage patterns for each device attached to APS+. Power consumption test will also include a simulated trigger of the advanced power strip IR sensor according to average duty cycles of American Households.

The data collected from SIM Lab runs was used to determine the overall power consumption and potential savings to be expected from integration of the product in a residential environment. This data of the APS+ was then further scaled to provide results for annual power savings from the product, thus providing an effective guideline for product design and commercialization.

The test was conducted from June 15, 2013 to September 15, 2013 in CalPlug. The detailed timeline and procedures are summarized as follows.
All tests will be conducted under similar conditions as would be utilized by a consumer (SIM Lab). Detailed test procedures are described as follows:

POWER CONSUMPTION OF TIER 2 APS+ FOR MOST COMMON CONFIGURATIONS

Three test runs were conducted in CalPlug SIM living room with four US most common configurations attached to TrickleStar’s Tier 2 APS+. The average power consumption of each configuration was measured and recorded. CalPlug’s primary research and secondary research on the US average user usage pattern was used to determine user engaged hours and absent hours during activities.

Furthermore, the methodology of calculating the Tier 2 APS+ energy savings has been developed. The annual energy savings are determined at 280 KWH on average.