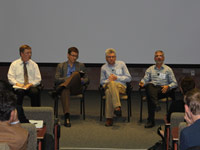 The average American over the age of 2 spends more than 34 hours a week watching live television, says a 2012 Nielsen report – plus another three to six hours watching taped programs. In the meantime, other ways to watch TV programs are gaining popularity, such as video streaming on a computer or a mobile device. What kind of new set-top boxes and new features are being deployed to meet the demand? How does this trend of pervasive “TV watching” impact the energy consumed in delivering the content? What is the outlook of energy savings in the deployment of future fleets? Will service providers continue to advance with new ENERGY STAR standards? Can other stakeholders help accelerate the plans to replace older generation boxes?

Imagine a world where all STBs go to sleep at less than five watts and wake up in five seconds. CalPlug has entered phase II on this “5W5s” roadmap with our industry project champions. In spite of ever advancing software, firmware, hardware and chipsets for STBs, the usage pattern and behavior of the users remain a dominant variable for energy consumption. Deemed savings are difficult to confirm. How can cutting-edge power management cope with wide differences in both the STBs and the users themselves? CalPlug has introduced the simulation labs to bridge the gap between bench-top testing and pilot programs in real homes.

Integrated demand side management (IDSM) involves an integration of energy efficient loads with demand response and energy storage, and distributed renewable generation. Set-top boxes, small network equipment and smart phones are candidates for serving as a network hub of future Zero Net Energy (ZNE) homes and buildings. Opportunities lie in various value-added features of such devices, such as home security, home entertainment and home healthcare. Peripheral wired and wireless demand-response control and consumer pattern-recognition devices will further aid in reducing personal energy footprints, providing a more cost- effective ZNE solution. CalPlug will launch a coordinated effort with manufacturers, utilities, government agencies and user advocacy groups in delivering energy- efficient plug load systems. Topics covered in the session include: How do plug load manufacturers coordinate their efforts in achieving a holistic energy management of their products? How would an energy efficiency program for individual plug loads evolve into an IDSM energy efficiency program? How would an incentive program for plug loads be designed? How should utilities and government agencies coordinate their ZNE programs to include plug loads?

Networked plug load devices and appliances are the future of effective power management and home automation. A seamless integration with the future smart grid technology can potentially regulate and incentivize efficiency for the whole category. In this session, experts in networking protocols, interoperability design, consumer electronics and power management systems will talk about the roadmaps and roadblocks in achieving truly networked plug loads for power management. How can manufacturers and utilities work together to ensure future interoperability of the connected plug loads? What kind of emerging technologies are most wanted for a successful market adoption?